“La Citronneraie”® is situated on the hillside of the “Annonciade”, the cradle of Menton, at an altitude of 120 metres. It is orientated in a southeast direction facing towards the rising sun. This exposition is favourable for the development of citrus fruits and the acclimatisation of tropical and sub-tropical plants.
The origins of “La Citronneraie”® go back to approximately the XVI century. In this period the hillside was terraced, and retaining stone walls, paths and steps were built. All of this was known as the “countryside” by the town dwellers. 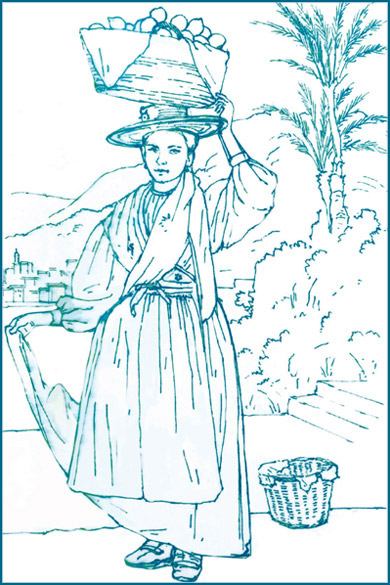 At this time, 200 olive trees were planted over the area of approximately 25,000 m2.
The water problem is crucial in the area. From the beginning of the XVIII century important piping work was undertaken to direct and preserve this precious liquid. An underground reservoir was hollowed out, 150 metres long and 2 metres high, to retain spring water. An underground water tank of 150 cubic metres was created in order to retain the water necessary to irrigate all the central area of the property.
Around 1820, a small rural house of about 70 m2 was built in the traditional “Mentonnaise” style. It was shaded by a terrace covered by beautiful pergolas of wisteria and jasmine. After the second world war and several owners, this beautiful property was partly abandoned.

Since the 1950s the current owner has given a new lease of life to the estate. He bought the central part of the estate from the PELOSO, ALBIN, and AGLIANY families consisting of 2500 m2 of grounds and an abandoned rural house. Then for several years he has continued to rebuild the original property buying little by little various additional areas of land. These transactions were brought about with the help of several families: VALETTA (Monti), VALETTA (Menton), LAURENTI, FIORENTINI, PALMARO, VIALE, CAMPI, VEZZOLI and PONZEVERA.

From 1953 renovations began in the garden and the rural house was restored. Great importance was placed on the choice of building materials and care was taken in the reconstruction. Priority was given to authenticity.
Today, the main house and its three outbuildings total about 1000 m2. The quality and original charm have been carefully preserved.
In 1957 planting began on the upper slopes of the estate with about a hundred new lemon trees. Today there are about 450 trees all of the variety “citron de Menton”.  This lemon variety with its perfumed scent, its zest and flavoured pulp is considered to be the most prestigious of some 80 species know at this present time. All the citrus fruit is grown organically, carefully tended and hand-picked. Every four years a quantity of ladybirds are released to ensure aphid control.
These deliciously flavoured fruits are used by some of the most famous French “Chefs” to enhance their much acclaimed 5-star menus thereby underlining the reputation of the Menton lemons.